Amitabh Bachchan, actor, film producer, television host, occasional playback singer and former politician first gained popularity in the early 1970s for films such as Zanjeer, Deewaar and Sholay, and was dubbed India’s “angry young man” for his on-screen roles in Bollywood. Big B has since appeared in over 200 Indian films in a career spanning more than five decades. Bachchan is widely regarded as one of the greatest and most influential actors in the history of Indian cinema as well as world cinema. Fans go crazy to just see a glimpse of him but imagine getting an autograph from this superstar will be like a cherry on top.

But did you know that Amitabh Bachchan had to wait for 46 years to get his favourite actor Dilip Kumar’s autograph? What happened was Mr. Bachchan had come to Mumbai with his parents and had gone to visit a hotel in South Mumbai. In the same hotel, Dilip Kumar was there with his friends. That time Big B tried to take the veteran actor’s autograph but because of the crowd, Bachchan’s voice couldn’t reach Yusuf Saab. The Badla actor was disheartened but he had got a second chance when the then Prime Minister Pandit Jawaharlal Nehru had organised a party where Big B saw Dilip Kumar, Dev Anand and Raj Kapoor for the first time. But even at the party, the Piku actor couldn’t get the Saudagar actor’s autograph. 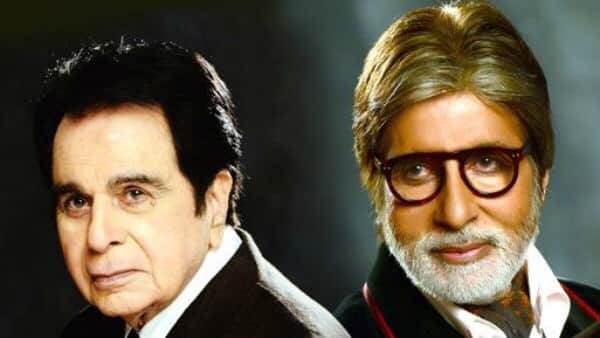 In the year 1982, Amitabh Bachchan had even got a chance to work with Dilip Kumar but he failed to get Kumar’s autograph. But finally, Big B’s dream came true. During the premiere of the 2005 film Black with Rani Mukerji, the actress had invited Dilip Kumar with his wife and actress Saira Banu to watch the film. Dilip Kumar was so impressed by Mr. Bachchan’s performance in the film that he started praising him after the movie and even wrote a long letter for the superstar after he reached home. He was all praise for the Shahenshah of Bollywood and at the end even signed on the letter. When Amitabh received this letter and saw Dilip Kumar’s autograph in it, his happiness knew no bounds. His dream had got fulfilled finally after 46 years.

Big B had even mentioned this on his blog. Infact, when Dilip Kumar was conferred a Lifetime Achievement Award by a news channel for his contribution to the Indian cinema, in a video message, Amitabh Bachchan showered praises upon the legendary actor known as the tragedy king of Bollywood. He said, “Dilip Sahab has inspired and will always inspire each actor associated with the Indian film industry.”

Check out the video here:

Watch: Ayushmann Khurrana nails his impersonation as Amitabh Bachchan and Shah Rukh Khan at the Filmfare Glamour And Style Awards 2019

Facebook Twitter Pinterest Tumblr Bollywood star Ayushmann Khurrana is a man of many talents. He can act, sing and even write poetry, something not many B-town stars can boast about. The actor, who attended the […]

Facebook Twitter Pinterest Tumblr There is a scene in Deewaar, in which Amitabh Bachchan talks to God, that scene influenced Ali Abbas Zafar Director Ali Abbas Zafar says there is one iconic scene of Amitabh […]