She is the golden girl of Bollywood, he is the man with the Midas touch. She is the eternal beauty, he is still reigning the Bollywood and like how! By the end of the 70s era, Rekha and Amitabh Bachchan’s love affair made its way to the industry grapevine and became the cover story for most magazines. Their on-screen chemistry was beyond the measure of any rate-o-meters, and soon their off-screen chemistry too became the talk of the town.

“Pardesiya yeh sachh hai piya, sab kehte maine tujhko dil de diya…” – While Rekha has professed her love for her Silsila co-star, Amitabh Bachchan, the later has denied all such speculations. Rekha and Amitabh’s brewing love affair is one of the most-talked-about affairs even till date. The love story of these two legends of Bollywood started on the sets of the film, Do Anjaane (1976) when Amitabh was already a married man.

Read Also: After An Affair With Amitabh Bachchan, Rekha Got Married, But Soon Her Husband Committed Suicide 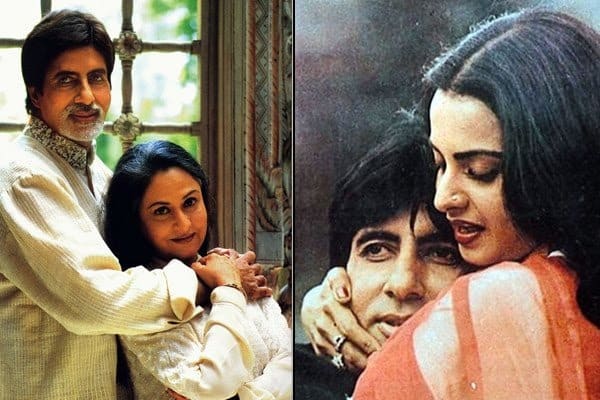 In a throwback interview with Filmfare in November 1984, Rekha talked about Amitabh Bachchan, relationships and also about having children. Speaking about Amitabh’s denial about their affair, Rekha shared with Filmfare, “Why should he have not done it? He did it to protect his image, to protect his family, to protect his children. I think it is beautiful, I don’t care what the public thinks of it. Why should the public know of my love for him or his love for me? I love him, he loves me – that’s it! I don’t care what anybody thinks. If he’d reacted that way towards me in private, I would have been very disappointed. But has he ever done that? I ask you. So why should I care about what he’s said in public? I know people must be saying bechari Rekha, pagal hai us par, phir bhi dekho. Maybe I deserve that pity. Not that he has 10 rollicking affairs! Mr Bachchan is still old-fashioned. He doesn’t want to hurt anybody, so why hurt his wife?” 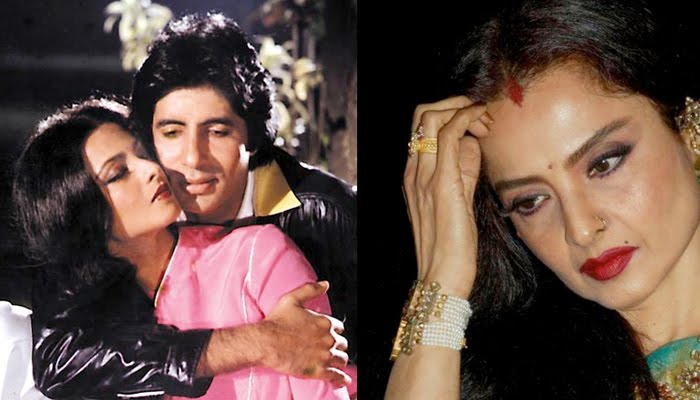 Khubsoorat Rekha went on to say, “My reaction is not a typical reaction, I know that. But there’s a total fulfilment. We are human beings who love and accept each other for what we are. There’s more happiness in our lives than misery. Nothing else matters. But as long as I’m with that person, I don’t care. I cannot identify me with anyone else. Don’t publish this. For he’ll deny it. Then I’ll affirm it. Then there will be a statement from his camp saying, “No, no. she is nuts like Parveen Babi.” Then I’ll say “No, no. Parveen Babi is not here, but here I am to issue a statement.” Anyway, why should I be talking to you about my personal life? I am a very creative person. I have lots of interests. People love talking about my personal life. But I want to keep it to myself. Mr Bachchan is important to me, not to anybody else.” 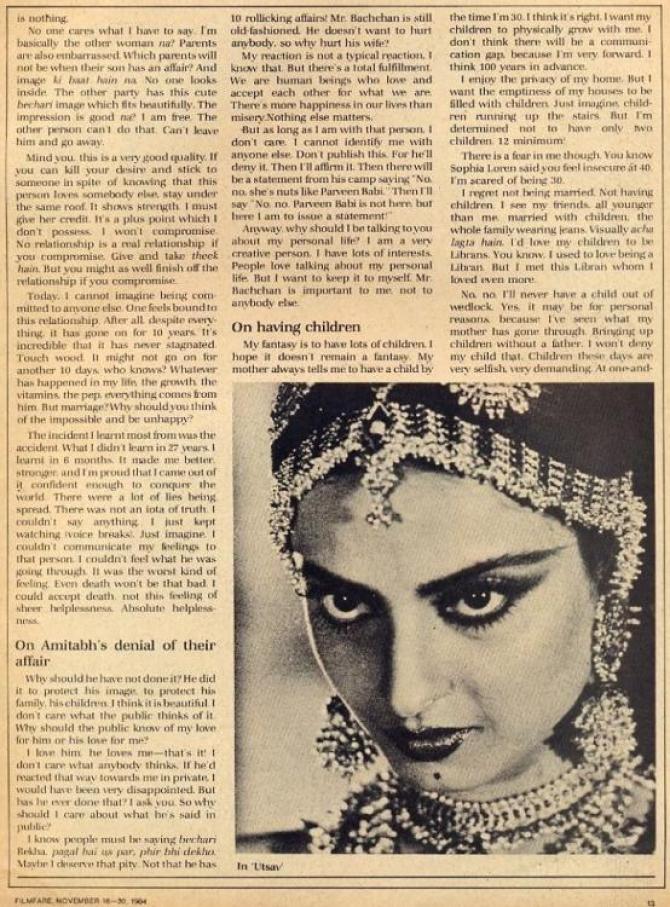 Bollywood’s Umrao Jaan further talked about having kids and was quoted as saying, “My fantasy is to have lots of children. I hope it doesn’t remain a fantasy. My mother always tells me to have a child by the time I’m 30. I think it’s right. I want my children to physically grow with me. I don’t think there will be a communication gap, because I’m very forward. I think 100 years in advance. I enjoy the privacy of my home. But I want the emptiness of my houses to be filled with children. Just imagine, children running up the stairs. But I am determined not to have only two children, 12 minimum. There’s a fear in me though. You know Sophia Loren said you feel insecure at 40. I’m scared of being 30.” 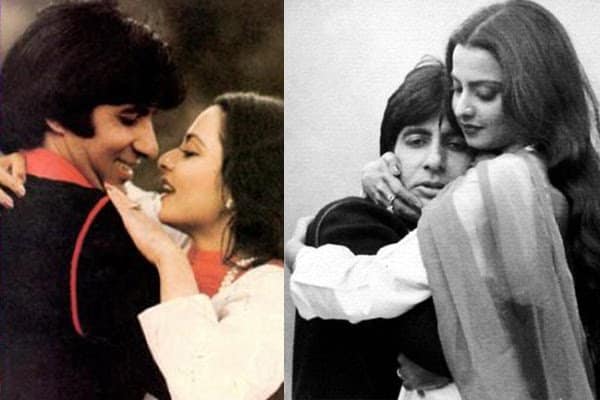 However, she maintained that she would never have kids out of wedlock. Rekha remarked, “I regret not being married, not having children. I see my friends, all younger than me, married with children, visually acha lata hain. I’d love my children to be Librans. You know I used to love being a Libran. But I met this Libran whom I loved even more. No, No I’ll never have a child out of wedlock. Yes, it may be for personal reasons because I have seen what my mother has gone through, bringing up children without a father. I won’t deny a child that. Children these days are very selfish and demanding. At one and a half months, they already know what’s around them. They are aware. I wasn’t aware till I was 16. You can’t fool them. I don’t know when I have a child. I might never have one. After all, children may tie me down to domesticated life, and I have other dreams too.” 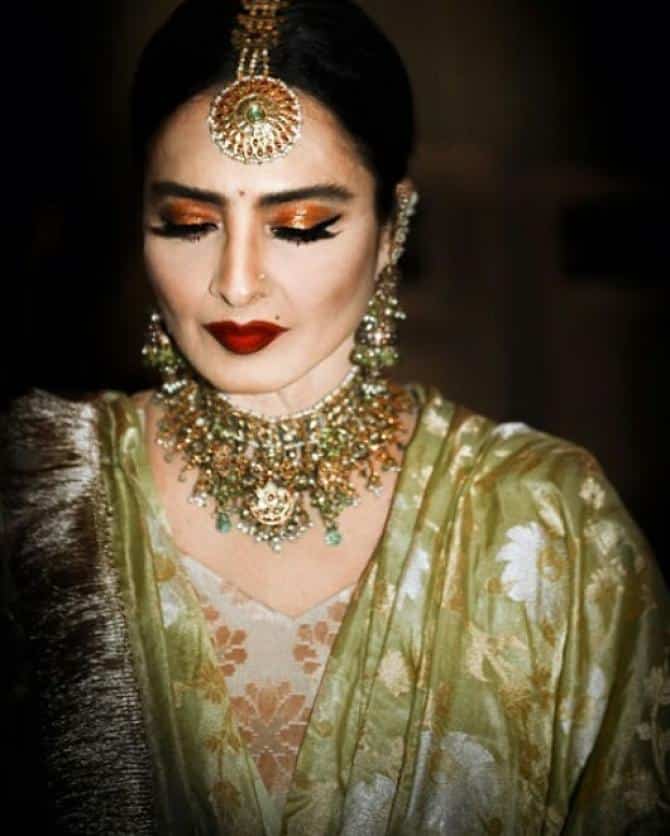 Life is too satisfying. Yet a woman I not complete without being a mother. But what guarantee is there that if I were to marry the man I love today, we’d have children? There might be something wrong with us. One must be satisfied with what one has. I’m very traditional. I just cannot think of having a child outside marriage. I’m very old-fashioned. Maybe I change my mind tomorrow. It’s a woman prerogative to keep changing.” 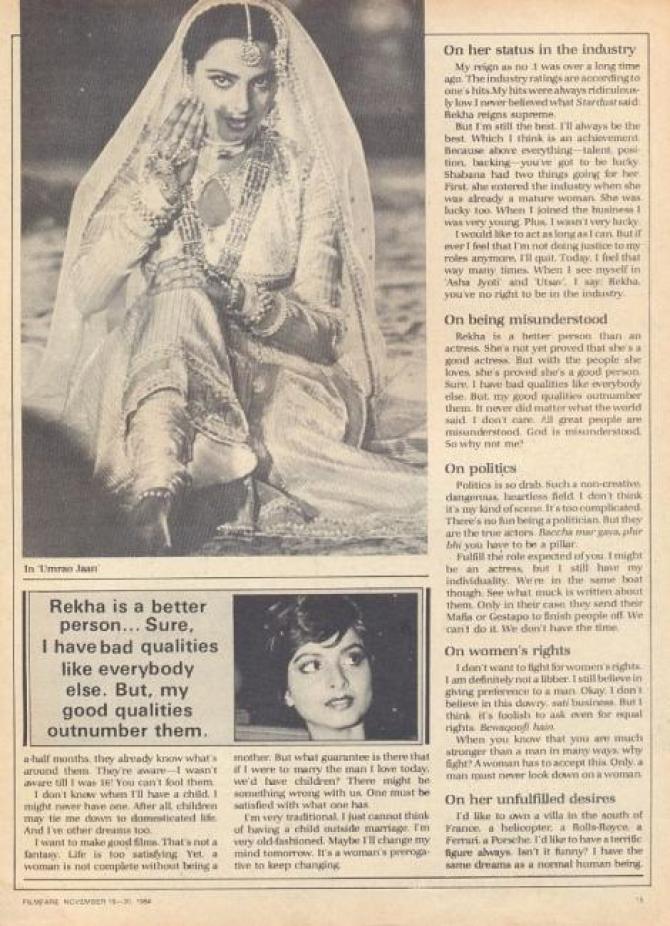 Phool Bane Angaray actress talked about being the ‘other woman’ and shared, “No one cares about what I have to say. I’m basically the other woman na? Parents are also embarrassed. Which parents will not be when their son has an affair? And image ki baat hain na. No one looks inside. The other party has this cute bechari image which fits beautifully. The impression is good na? I’m free. The other person can’t do that. Can’t leave him and go away. Mind you, this is a very good quality. If you can kill your desire and stick to someone in spite of knowing that this person loves somebody else, stay under the same roof. It shows strength. I must give her credit. It’s a plus point which I don’t possess. I won’t compromise. Give and take theek hain. But you might finish off the relationship if you compromise.” 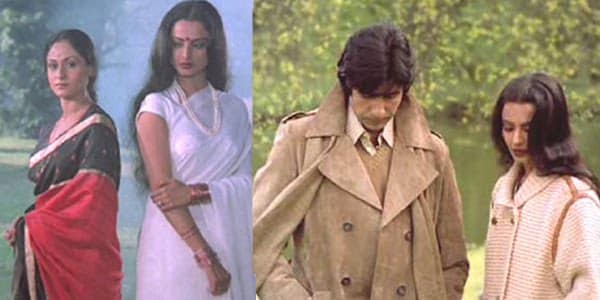 Rekha opened up about being in a dead-end relationship, and further added, “Today, I cannot imagine being committed to anyone else. One feels bound to this relationship. After all, despite everything, it has gone on for 10 years. It’s incredible that it never stagnated. Touch wood. It might not on for another 10 days, who knows? Whatever has happened in my life, the growth, the vitamins, the pep, everything comes from him. But marriage? Why should you think of the impossible and be unhappy?”

Rekha concluded by saying, “The incident I learnt most from was the accident. What I didn’t learn in 27 years, I learnt in 6 months. It made me better, stronger and I’m proud that I came out of it confident enough to conquer the world. There were a lot of lies being spread. There was not an iota of truth. I couldn’t say anything. I just kept watching (voice breaks). Just imagine, I couldn’t communicate my feelings to that person. I couldn’t feel what he was going through. It was the worst kind of feeling. Even death won’t be that bad. I could accept death, but not this feeling of sheer helplessness. Absolute helplessness.” 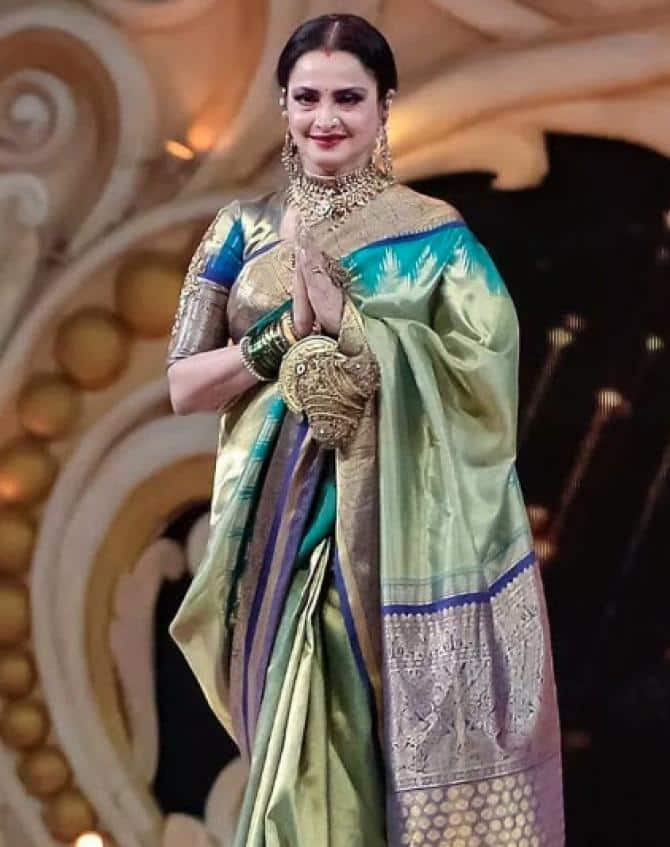 Rekha is someone who never shied away from the prying eyes of the media, rather she dared to bare it all in front of everyone. She is extremely honest, and that’s what we all love about her. Rekha was, is and will always be an iconic Bollywood diva!

Amitabh Bachchan didn’t get a home-quarantine stamp on his hand, actor clarifies

The photograph of a hand stamped Home Quarantined, which Amitabh Bachchan had tweeted, is not his hand, the actor has now clarified. Big B had tweeted the photo early on Wednesday and captioned it, “Stamping started on hands with voter ink, in Mumbai .. keep safe, be cautious, remain isolated if detected .” […]

Facebook Twitter Pinterest Tumblr Shah Rukh Khan or King Khan as he is lovingly called has a knack for giving us great photos every time he is clicked. The Badshah of Bollywood is currently busy […]

“Neither of us was at fault,” says Subhash Ghai revealing the reason behind the incomplete film with Amitabh Bachchan

Facebook Twitter Pinterest Tumblr Subhash Ghai is one of the celebrated filmmakers of Bollywood. He has films like Taal, Karz, Ram Lakhan and Khalnayak to his credit and has worked with several A-list actors. However, […]