In the Indian Film Industry there are four Actors who entered my life when I was a Teenager and they are Rajinikanth, Kamal Hassan, Amitabh Bachchan and Mithun Chakraborty. They have made me umbelieve the saying “Change is not the only constant” rather they are the only constant in my life that has changed from 13 years teenager to forty plus men. In fact RAM (Rajini, Amitabh and Mithun) redefined the Hero of Indian Cinema breaking every rules and norms of the so called Fair, Handsome and romantic hero into Tall, dark and Handsome. When RAM entered the film industry in the 70s they were rejected, rebuked and ridiculed because they were not the usual Hero as defined by the Cinema Industry and accepted by the audiences.

This blog is dedicated to the Shahenshah of Bollywood, Sadi ka Mahanayak (Hindi for, “Greatest actor of the century”), Star of the Millennium, or Big B, who was born as Inquilaab Srivastava on the 11th of October, 1942 in Ahmedabad, UP. He went to Sherwood College, a boarding school in the hill-station town of Nainital, and from there to Delhi University where he earned a double MA degree. He worled as a stage actor, radio announcer and freight company executive in Calcutta, before entering Film Industry. As a Fan of the actor I had coined the term “Godstar” inspired by the Hollywood movie Godfather because I feel he is the Godfather of Stardom in the Indian Film Industry who is loved by my children to my father or your children to your father. Amitabh Bachchan’s real surname was Shrivastava. His father, acclaimed poet Harivansh Rai Bachchan, had adopted the pen name Bachchan. So, the family adopted this surname. Big B was initially named Inquilaab, inspired by the phrase Inquilab Zindabad. 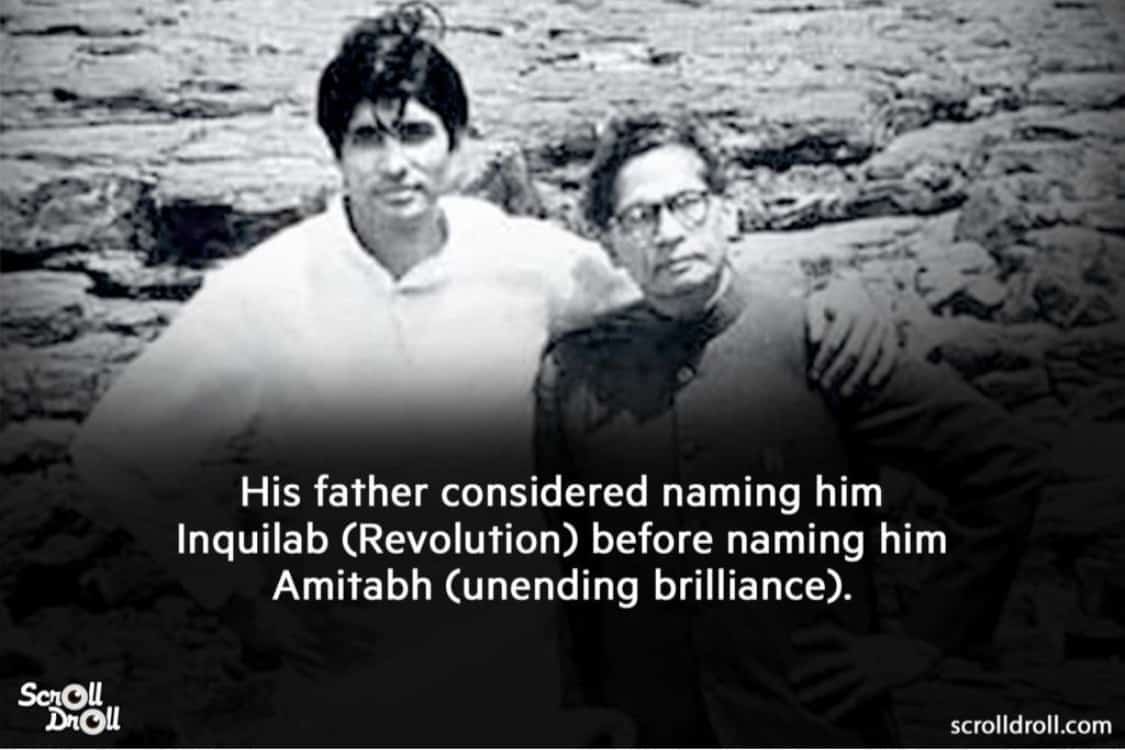 He was introduced by Director Khwaja Ahmad Abbas in his film Saat Hindustani in 1969 for a remuneration of Rs 5000/- that also had the great actor Utpal Dutt. He was written off as a failed Actor with 12 flops and he was already 30 years. The credit of introducing the “Angry Young Man” who gave the first “Superstar of India” Rajesh Khanna a run for his money goes to Screen Writer duo Salim Javed. The landmark film was Zanjeer in the year 1973 at the age of 31 years. His lady luck was his marriage to Jaya Bachchan in the same year and it changed the ball game altogether.

In 1975 the actor acted in two films Deewar and Sholay regarded as important in Hindi cinema history, both written by Salim-Javed, In this period Amitabh was presented as the wronged hero fighting a crooked system and circumstances of deprivation in films like Zanjeer, Deeewar, Trishul, Kaala Patthar and Shakti. My personal favourite is Kaala Pathar for the intensity of anger and Trishul for standing tall against the great actor Sanjeev Kumar. But the first Hindi film I saw was Coolie in the year 1983. It was director Prakash Mehra who was also responsible for creating angry young man written by Salim Javed and make it believable on Screen. He has directed him in eight films including the cult classic Muqaddar Ka Sikandar in 1978, Laawaris in 1981 and Sharaabi in 1984. Amitabh played a character called “Vijay” 20 times in his career spanning five decades from 1969 to 2019.

But the Romantic side of the angry young man was explored and exposed by King of Romance Yash Chopra in his film Kabhie Kabhie in 1976 and Silsila in 1981 though there were other Romantic films that flopped like Pyar Ki Kahani with Tanuja in 1971, Bansi Birju and Ek Nazar with Jaya in 1972, though Bemisal with Rakhi in 1982 was a classic by Hrishikesh Mukherjee. Yash Chopra directed him in six films starting with Deewar in 1975 to Veer-Zaara in 2004. In fact though the media talked about his paring with Jaya Bachchan and Rekha often, I perosnaly liked his pairing with Rakhi. They have worked together in 14 films starting with Reshma aur Shera in 1971 to Ek Rishtaa: The Bond of Love in 2000 spanning 29 years. Another pairing I adore is Amit ji and Hema Ji and they have acted together in 16 films starting with Kasuati in 1974 to Bbuddah… Hoga Terra Baap in 2010. I also loved Amit ji with Meenakshi Sheshadri and Jaya Prada in the 80s and 90s.

The comedy side of the Actor was first explored by Manmohan Desai in Amar Akbar Anthony in 1977 where he played the third lead opposite Vinod Khanna and Rishi Kapoor as Anthony Gonsalves. Prakash Mehra also explored the comedy forte of Amitji in his film Namak Halaal in 1982. Manmohan Desai has directed him in eight films. But he started his comedy with Hrishikesh Mukherjee’s Chupke Chupke in 1975. Even in the Ramesh Sippy’s Sholay that released the same year exhibited his comedy skill where the scene with Mausi became a cult scene and one of the best comedy scene ever in Hindi Films. Ramesh Sippy later directed him in Shaan in 1980 and Shakti in 1982.

But it was Hrishikesh Mukherjee and his films that reinvented Bachchan, every time he cast him in a movie. For a generation that has grown up watching him, there are several forms of Amitabh Bachchan it is connected to. Amongst them — and more than the angry young man — it is Hrishikesh Mukherjee’s portrayal of Amitabh Bachchan as the man with many layers (sometimes, grey shades) that looked real. He directed him in seven films starting with Anand in 1971 to Alaap in 1977.

According to Amit ji’s own words – “I will have to admit that most of the interesting characters that I played have been in films that were made by him — be it Anand or Mili or Chupke Chupke or Bemisal or Namak Haram or Jurmana. They were all exceptionally well-etched. The greatest opportunity to perform for me has been in his films.

Amitabh – The Godstar is the second Actor with 14 double roles and one triple role Mahaan that failed at the Box Office. Mithun Chakraaborty holds the record with 20 double roles and one triple role. Interestingly in 1982 alone he had three films in which he played double role- Satte Pe Satta (look-alikes), Bemisaal (brothers) and Desh Premee (father-son). This remains a unique and commendable feather in his cap. Both in 1978 and 1999 he had two double-role releases each- Don and Kasme Waade in 1978 and Lal Baadshah and Suyavamsham in 1999. Starting from 1973 and going right up to 2004, he played father-son in five films, look-alike in six films, brothers in two and there was one re-incarnation story.

But in 90s it was Mukul S. Anand and his Agneepath in 1990 , Hum in 1991 and Khuda Gawah in 1992 that played a significant part in his career that was under threat from the changing dynamics from Action to Romance again in Hindi Cinema. The milestone is winning first National Award as best actor for Agneepath. In fact Agneepath holds a special place in my heart as it featured Amit ji with Mithun da two greatest Actor of India. It was the same with Ganga Jamuna Saraswati in 1988 that brought together Amit ji and Mithun da for the first time though he had small role in the Dulal Guha directed Do Anjaane in 1976 but director Manmohan Desai was not able to support it with good script and content and not able to do justice to Mithunda’s stardom and it was the reason behind its failure at the Box office.

I also loved HUM again because it brought together Amit ji with the “Last Superstar of India” Rajinikanth, though I enjoyed watching them together first in Andha Kanoon way back in 1983. Also Geraftaar in 1985 is also very special as it brought together three stalwart of Indian Cinema Amitabh, Rajinikanth and Kamal Hassan together.

I was very sad when their first film tiled Kabardar in 1984 Starring Amitabh and Kamal Hassan was shelved. The movie, Kabardar is supposed to be the first one to feature both Amitabh Bachchan and Kamal Hassan together. However, the film could not be released. Similarly there was another film Shinakhat in1988 Starring Amitabh and Rajinikanth) that was shelved making me sad. Three other films that got shelved and I wished to see was J.P.Dutta’s Bandhua starring Amit ji with Madhuri Dixit and Devaa to be directed by the showman Subhash Ghai and Raj N.Sippy’s Tala Chabi starring Amitabh Bachchan, Parveen Babi, Mithun Chakraborty and Rati Agnihotri . He was the highest paid Indian actor from late 1970s to 1992. 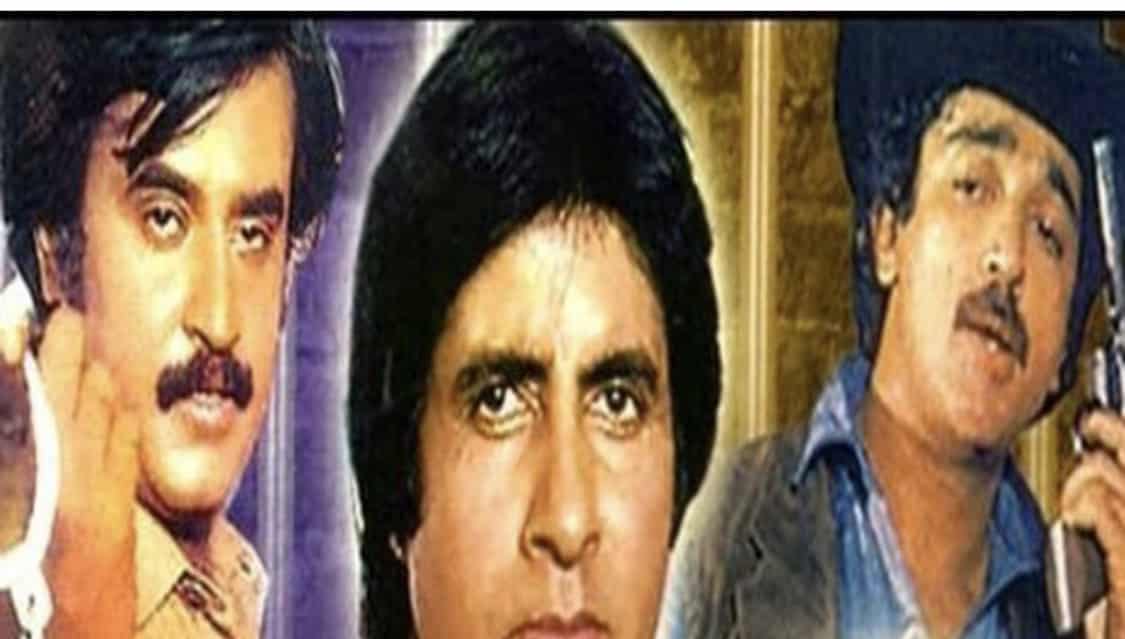 The only leading actors with whom Big B did not share screen were Raaj Kumar, Raj Kapoor, Rajendra Kumar, Feroz Khan, and Dev Anand. I had a dream to see Amit Ji with the “first style Icon” of Indian Screen Feroz Khan. Feroz Khan had initially approached Amitabh for the role of Amar in Qurbani. Amitabh’s date’s were blocked for Shaan and the deal fell through. After Janasheen, Feroz Khan was to start a film titled ” Nasha” . The film was to star Feroz Khan, Amitabh Bachchan, Fardeen Khan , Aishwarya Rai and Lopsang. But Feroz decided to shelve the film and remake Kurbani.

He was also never paired opposite Reena Roy though both worked together in Naseeb in 1981 and Andha Kanoon in 1983. Another pairing I wish to see was Amit Ji with Leena Chandravakar. In 1969, Sawan Kumar Tak was going to launch a film titled Mirza Ghalib. The film starred Amitabh Bachchan and Leena Chandarvarkar. The film got shelved due to lack of finances. The other leading actress of 80s who was not paired opposite him include Poonam Dhillon , Padmini Kolhapuri and Anita Raaj though Poonam made her debut in Trishul.

In addition to acting, Bachchan has worked as a playback singer, film producer and television presenter. He has hosted several seasons of the game show Kaun Banega Crorepati, The Government of India honoured him with the Padma Shri in 1984, the Padma Bhushan in 2001 and the Padma Vibhushan in 2015 for his contributions to the arts. This year he received Dadasaheb Phalke Award as lifetime achievement award. The Government of France honoured him with its highest civilian honour, Knight of the Legion of Honour, in 2007 for his exceptional career in the world of cinema and beyond. He is also the first Asian actor having a wax model of his likeness displayed at Madame Tussaud’s in London, UK

Apart from Hindi films he has also acted in regional films Barsaat Ki Ek Raat directed by Shakti Samanta in 1981 with Bengali version, titled “Anusandhan”, Malayalam film Kandahar in 2010, English film The Great Gatsby in 2012, Telugu film Manam in 2014 and Sye Raa Narasimha Reddy in 2019 and this year he will make his debut in Tamil with Uyarntha Manithan. His last Hindi film Badla in 2019 by Sujit Ghosh is super hit. He has four more films lined up for 2019 and three films for 2020. At the age of 77 he is inspiring us with his active life and exhibiting “Kayakave Kailasha” (Work is Worship). So here is wishing him a Happy and Healthy birthday and praying that he completes his century to prove that Work and Discipline is the secret behind long and healthy life.

Facebook Twitter Pinterest Tumblr Amitabh Bachchan and Taapsee Pannu’s suspense drama Badla is in its third week now but the film continues to earn profits at the box office. So far, Badla has managed box […]

The Rs 1 billion blockbuster club: Amitabh Bachchan is a member

Facebook Twitter Pinterest Tumblr It must be the biggest irony of Amitabh Bachchan’s celebrated career spread over 49 years that despite featuring in almost 230 films, the Big B did not have a single hit […]

Amitabh Bachchan shares the teaser of his upcoming film Jhund

The makers of the Amitabh Bachchan starrer, Jhund, released the teaser of the film shortly after releasing its first poster. The film”s poster was released yesterday. […]