Amitabh and Rekha’s love story is one of the most talked about affairs of Bollywood even till date. Yet, this much-talked about love story always remained a mystery as both the actors never accepted their relationship in public. While the two themselves have said very little, everyone else seems more than certain about the affair.

Amitabh and Rekha- the two legends of our film industry, how did it all begin and how it ended? Here is unfolding the secret behind this love story.

Their love story began on the sets of film Do Anjaane (1976), when Amitabh was a married man. During the initial days of their secret relationship, the couple used to meet in a bungalow that belonged to Rekha’s friend. Nobody knew about this affair between already married Amitabh and Rekha. Everything was a smooth sail until an incident happened.

During the shoots of Ganga Ki Saugandh (1978), Big B reportedly lost his temper on a co-actor who was misbehaving with Rekha. After this, their affair came in the limelight and grabbed the media attention. The two denied the affiar, but it is loud and clear that the two were dating each other. In one of the interviews, Silsila director, Yash Chopra confirmed their relationship! 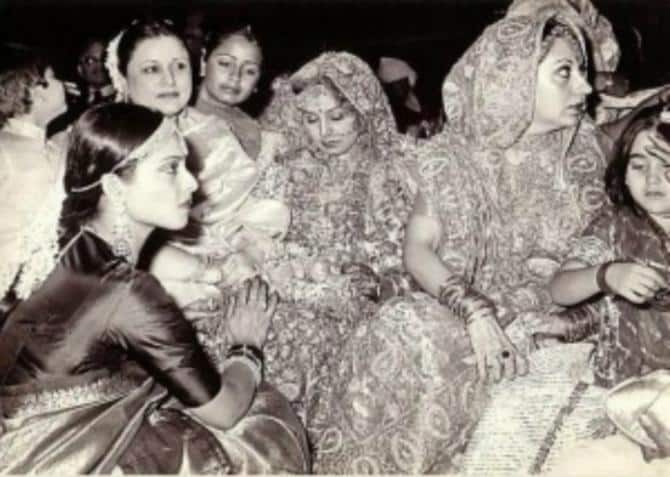 The gossip mills started churning out stories of Rekha-Amitabh’s affair. They even made headlines saying that Rekha and Amitabh have got secretly married. And, these speculations caught more fire when Rekha made a sensational entry at Rishi Kapoor and Neetu Singh’s wedding, wearing sindoor and mangalsutra. The attention of everyone present at the wedding shifted to Rekha and her much-married look! People started whispering that has Rekha tied the knot!

Not only this, she also went up to Amitabh and started talking to him formally, raising more eyebrows! Talking about how Jaya felt at that time, one of the sources revealed:

“Jaya tried to keep a stoic front for a long time, but eventually she had to bend her head and let the tears roll down.”

After a few minutes of conversation, the controversy queen of that time left the wedding venue! Many questions about this jodi’s affair were answered with this bold step taken by Rekha.

When Jaya came to know about the affair 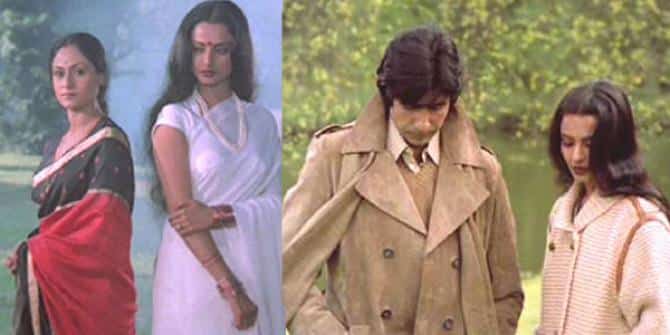 It was reported that after this incident, Jaya Bachchan invited Rekha home for dinner and told her candidly that she would never leave her husband whatever may happen. And likewise, Jaya kept her promise till the very end. Rekha finally realised that she either want to be Mrs. Bachchan or stay single!

In an interview given to Filmfare magazine in 1984, Rekha spoke about Amitabh’s denial of their relationship. She said:

“Why should he have not done it? He did it to protect his image, his family, his children. Why should the public know of my love for him or his love for me? I love him and he loves me- that’s it! If he’d reacted that ways towards me in private, I would have been very disappointed.”

“Mr. Bachchan is still old-fashioned. He doesn’t want to hurt anybody, so why hurt his wife?”

Amitabh Bachchan despite the superfluous love for Rekha, never admitted it in public. On the other hand, Rekha boldly admitted her love for him. Silsila was this enigmatic couple’s last film together. 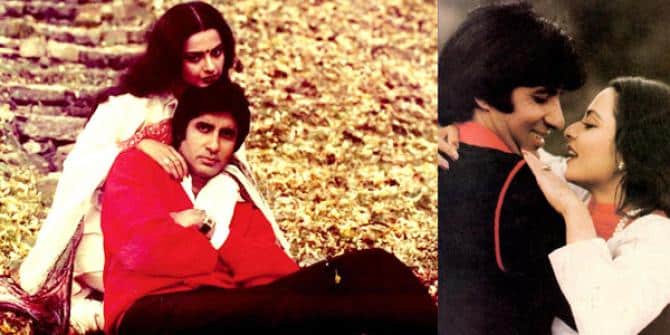 In an interview with BBC, director Yash Chopra said that Rekha and Amitabh were very much in a relationship before Silsila.

“I was always on tenterhooks and scared (during Silsila) because it was real life coming into reel life. Jaya is his wife and Rekha is his girlfriend and the same story is going on (in real life). Anything could have happened because they are working together.”

After the shoot of Silsila, Amitabh-Rekha’s relationship began to fade. Rekha wanted to marry Amitabh and did not want to settle down with the tag of the ‘other woman’ in Amitabh’s life. She realised she has no future in this relationship as Amitabh was not in any mood to leave his wife Jaya for Rekha. With this, their passionate love story came to an end, both on and off screen.

Does Rekha wear sindoor for Big B? 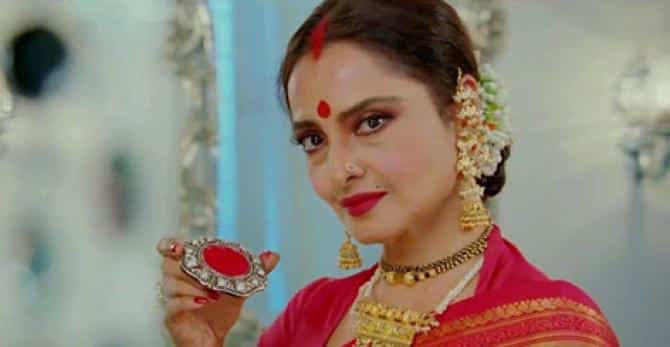 Well, even though Rekha and Amitabh went their separate paths afterwards, but it is well-known that Rekha has always seen making appearances supporting a sindoor on her forehead. While most people for long dismissed it to be Rekha’s unique style statement, Deepali Issar, actor Puneet Issar’s wife believes it to be otherwise. She once revealed:

“Rekha wears sindoor for Big B.”

In one of her previous interviews, while receiving an award, Rekha said:

“In the city I come from, it’s fashionable to wear sindoor.”
She has been wearing sindoor for more than two decades now! In a candid interview in 2008, she was again asked about the reason behind wearing sindoor. She said:

“I don’t worry about people’s reactions. By the way, I think it looks rather nice on me.. sindoor suits me.” 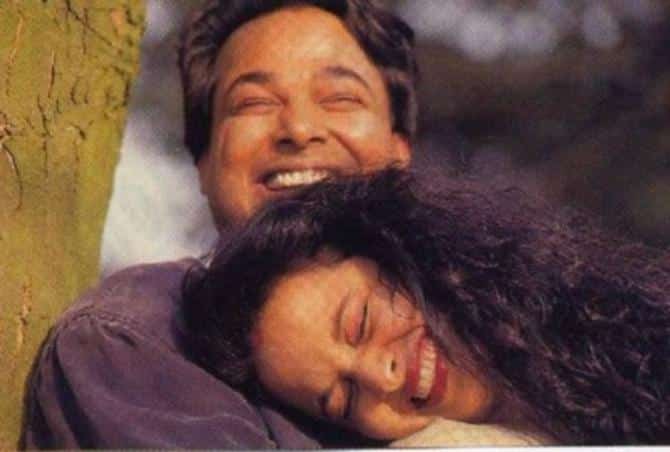 After Amitabh and Rekha’s relationship had an unfortunate ending, she moved on in life and got married in 1990. In her recently released biography, there is a chapter that gives the clear details of her marriage. The excerpts read:

“Rekha was finally getting married. After a lifetime of seeking, Rekha, born out of wedlock, had finally got what she most desired: a legitimate surname.”

“The initial days in London were beautiful. That was the first time that Rekha and Mukesh had spent so much time together. But it took only a week for Rekha to realise that they were very different people. She was also shocked to see Mukesh taking several pills a day. Still, she thought, now that they had to spend the rest of their lives together, such matters would have to be overlooked. ‘I’ve to make [a] success of it,’ she told herself. ‘Can Rekha fail in anything she attempts?’ They had been in London for more than a week. Rekha could see that something was troubling Mukesh. And then, one day, a gloomy Mukesh looked deep into her eyes and said, ‘There’s an AB in my life too.’ 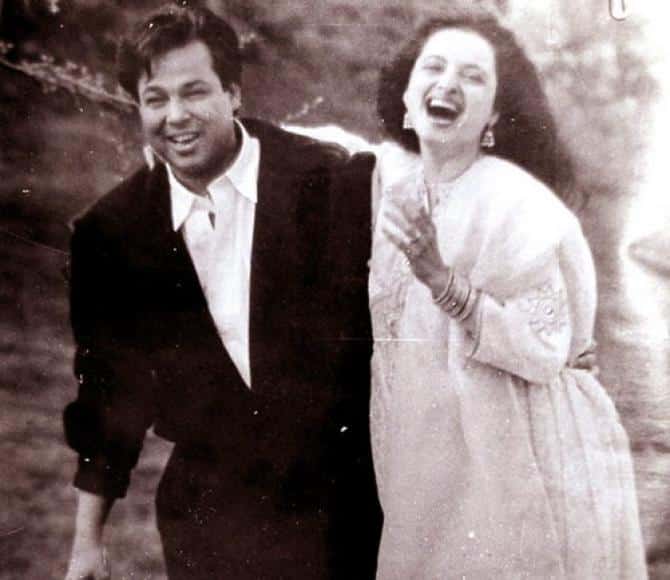 Three months into the marriage, Rekha was divastated to know that her husband was mentally ill. She decided to take some time out and think about what is wrong with her husband and marriage. But when she was not able to find a solution to solve her marital problems, she decided to distance herself from Mukesh and his family. She left his home and stopped taking his calls. On one unfortunate day, when her distressed husband was not able to take all this, decided to take away his life. In a very dramatic style, he hanged himself to the ceiling fan of his room, using his wife’s dupatta. Their marriage lasted for only seven months!

She was blamed by Mukesh’s family for being a bad wife and taking away his life. She was projected as the ‘Vamp’ by not only the media but also by many people from the film fraternity. Rekha has always been very unlucky in love!

Rekha still in love with Amitabh? 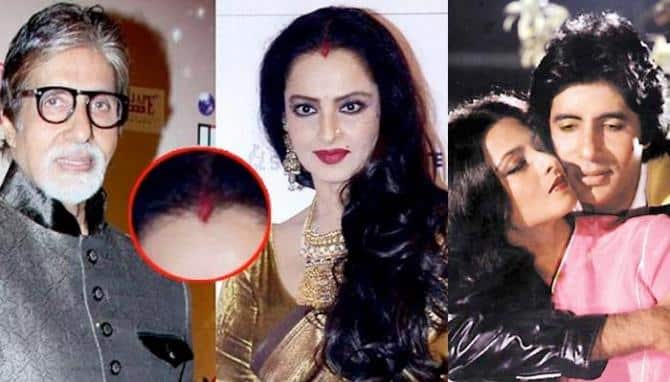 Some say that Rekha is still smitten by Big-B. In one of her interviews to Hindustan Times in 2008, when the journalist asked her if she would like people to stop connecting her to Mr. Bachchan, she immediately replied:

“Why? I hope not. Mr Bachchan is one of the best things to have happened in my life. The best teacher, the best guru. Well, I’ve chosen to learn as much from his off-camera.. as from his on-camera demeanours.”

This is a heartbreaking tale of unrequited love which never saw the light of the day! Post-Silsila, Amitabh is said to have ignored Rekha altogether. Though the two came quite close to starring together in R Balki’s Shamitabh, they did not share any screen space together. This shows that the wounds may have healed with time, the scars never disappeared.

Rekha’s lonely life has seen many rumours and some truth. Even her marriage to Delhi-based businessman Mukesh Aggarwal did not last long. But whatever the circumstances had been for Amitabh and Rekha’s breakup, the heavy aura of this sad love-story still lingers on! After so much happened in Rekha’s personal life, her zeal towards life has still not ended. She is truly a diva!

Facebook Twitter Pinterest Tumblr It’s finally here! The picture of Amitabh Bachchan from Dabboo Ratnani’s 2020 calendar is out now and it is everything a fan of Big B can ask for. In the brand […]

‘Gulabo Sitabo’: Amitabh Bachchan explains why his kurta had buttons in the back

Amitabh Bachchan loses 5 kilos after returning from hospital: It is fantastic for me

Facebook Twitter Pinterest Tumblr Amitabh Bachchan took to his personal blog to open up about his health conditions after coming back from the hospital. He has now resumed shooting for Kaun Banega Crorepati 11. After […]